On July 19, 2014, people from across the Navajo Reservation and their supporters remembered the July 16, 1979, radioactive disaster with a walk to the United Nuclear Corporation uranium tailings flood site and memories of loved ones that died from cancer related to the former uranium mining in the area and the radioactive flood. Photo by Marley Shebala. (Please provide proper photo credit when reusing photo.)

The Navajo Nation Council is having a 7:30 a.m. at the Quality Inn in Window Rock, Ariz., today, July 22, 2014, to discuss Delegate Edmund Yazzie’s LEGISLATION 0091-14, which would nullify the Resources and Development Committee’s action that created a two-member Subcomittee to draft an agreement with Uranium Resources Inc. of Texas to operate an In-situ Uranium mining demonstration project in the eastern part of the Navajo Reservation.

During the Council’s debate today over the adoption of their agenda for their five-day summer session, an attempt was made by two members of the RDC, Chairperson Katherine Benally and Subcommittee Chairperson Leonard Tsosie, to remove 0091-14 from the agenda.

Tsosie claimed that 0091-14 was “illegally” placed on the Council agenda because it did not go before the RDC, which he said was also creating “disharmony.”

Benally agreed with Tsosie and said that if the Naabik’iyati Committee could bypass the other standing committees by simply recommending legislation to the Council then why have four other committees.

But when the RDC was debating the approval of LEGISLATION 0373-13, which created the Subcommittee on uranium, the Navajo Department of Justice advised the RDC against it because it violated two Navajo laws and an agreement that URI made with the tribal justice department to clean up its former uranium mining site before even talking about additional uranium mining.

The two tribal laws are the ban on uranium mining and the transportation of hazardous material over tribal land.

And community members from the eastern part of the Navajo Reservation, which is where the uranium mining demonstration project was to be located, also SPOKE OUT against the creation of the RDC subcommittee.

The Council’s EASTERN NAVAJO LAND COMMISSION, which consists of Council delegates, submitted legislation opposing the subcommittee because it did not comply with the tribal legislative process.

The ENLC stated that since the RDC’s legislation impacted two Navajo laws and a legal agreement that it needed to go before the Naabik’iyati Committee and then the Council, which is the only government entity legally authorized to waive tribal laws.

But the RDC ignored the tribal justice department, the ENLC, NEPA and COMMUNITY PEOPLE and they approved the creation of its subcommittee at a Dec. 23, 2013, meeting that was held at Chilchinbeto, Ariz., which is about a two hour and 30 minutes drive from the Navajo Nation’s capital, Window Rock, Ariz.

On Dec. 23, 2013, RDC member Delegate Leonard Tsosie noted that the chapter of Church Rock, NM, passed LEGISLATION supporting the creation of a RDC subcommittee to work with URI.

During the 35th commemoration of the United Nuclear Corporation uranium tailings spill in the Church Rock, NM, area on July 19, 2014, at the Red Water Pond community, local people criticized the Church Rock chapter president for manipulating the community’s vote in support of URI.

And when the RDC subcommittee held a meeting at Church Rock chapter, which was attended by more than 200 community of all ages, the chapter president was the only supporter of URI.

But ever since the RDC approved 0373-13 on Dec. 23, 2014, the tribal justice department, ENLC, NEPA and community people have been debating with the RDC Subcommittee, which consists of Delegates Leonard Tsosie and Leonard Pete, over the legality of the RDC’s actions.

Apachito started 0104-14 on April 22, 2014, and after numerous RDC debates and several agreements by Apachito to postpone action on his legislation because Delegate Tsosie repeatedly pleaded for additional time and promised to have a final report for the RDC that would then go to the Naabik’iyati Committee and the Council, Yazzie took 0091-14 to the Naabik’iyati Committee on July 27, 2014.

URI representatives have attended all of the Subcommittee meetings and made PRESENTATIONS regarding the reduction of uranium mining cleanup standards, which URI claimed would reduce the cost of cleanup and therefore increase cleanup of not just their property but other Navajo Reservation areas impacted by uranium mining and milling.

After several hours of heated debate and several failed attempts to refer 0091-14 back to the RDC, the Naabi Committee voted 7 in favor, 6 opposed to table it and have a work session on it, which was later scheduled for July 18, 2014.

The executive session was to discuss a proposed agreement from URI to reportedly relinquish more than 4,000 acres in the Crownpoint, N.M., area, which is in Eastern Navajo, in exchange for Council approval for URI to do in-situ uranium mining on their property, which is located near Church Rock, N.M., and transport the uranium ore across three miles of Navajo Reservation land.

Immediately after the executive session, RDC Chairperson Benally called for a vote on 0104-14. The two RDC members voting for the removal of the Subcommittee were Delegates Apachito and David Tom. The three members opposing it were Delegates Tsosie and Pete and Vice Chairperson Roscoe Smith. 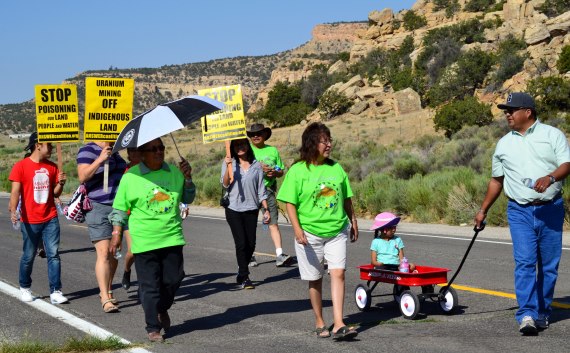 Navajo Council Delegate Edmund Yazzie, who was pulling a wagon that his daughter sat in, was among about a hundred people that walked to the site of a 1979 nuclear disaster near Church Rock, N.M., on July 19, 2014. Photo by Marley Shebala. (Please provide proper photo credit when reusing photo.)

Also during the 35th commemoration of the UNC uranium tailings spill, Yazzie informed the people that the 7:30 am meeting on July 22 would involve an executive session where another attempt would be made to remove 0091-14 from the Council’s agenda. 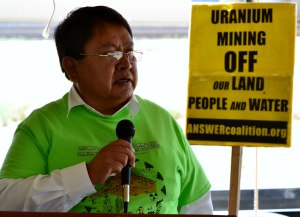 A neon green
tee shirt was part of the 35th commemoration of a 1979 radioactive flood near Church Rock, N.M., Navajo Council Delegate Mel Begay was among several tribal dignataries at the commemoration on July 19, 2014. Photo by Marley Shebala. (Please provide proper photo credit when reusing photo.)

Delegates Yazzie, Mel Begay, who also represents communities in Eastern Navajo, and Russell Begaye called for the people to attend the 7:30 am meeting and show the Council that they support the Council’s approval of 0091-14.

On July 21, 2014, the Eastern Navajo Dine’ Against Uranium Mining, Red Water Pond Road Community Association, Dine’ NO NUKES, Multicultural Alliance for a Safe Environment, Sierra Club, and local residents called for an 11 a.m. press conference in front of the Council chambers in Window Rock, Ariz., regarding 0091-14.

According to the groups’ July 21 PRESS RELEASE, “The Diné groups and allies call for the Navajo Nation Council to abide by its own policy and protocol. Edmund Yazzie’s Legislation No. 0091-14, to be heard during the Council’s Summer Session, will take steps to correct a flawed process that took place on December 23, 2013 when a vote by three members of RDC passed Legislation No. 0373-13 which allows URI a right-of-way and use of its Nuclear Regulatory Commission license to potentially mine and transport newly-mined uranium on Navajo Trust Land thereby violating two Navajo Nation policies.

“The appropriate protocol for such a legislation that violates Navajo policy should have taken Legislation No. 0373-13 next to be considered by the Full Navajo Nation Council after RDC.

“The Diné Concerned Citizens calls on the Navajo Nation Council to make sure URI is accountable to the legally binding Temporary Access Agreement which clearly states URI agrees to cleanup up waste on Churchrock Sections 17 & 8 before new mining occurs,” the groups stated. 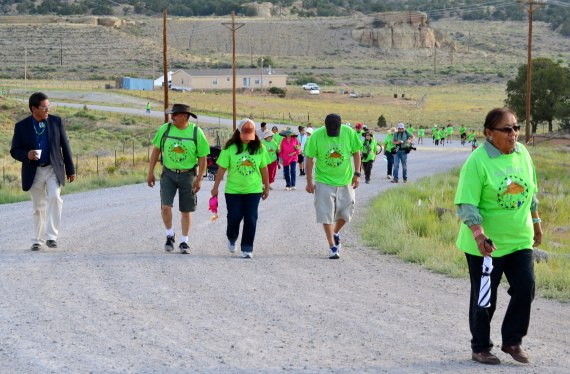 Navajo Council Delegate Russell Begaye, far left, took part in an early morning walk from the Red Water Pond to the site of a 1979 radioactive disaster. The walk was part of the 35th commemoration of the 1979 catastrophe on July 19, 2014. Photo by Marley Shebala. (Please provide proper photo credit when reusing photo.)