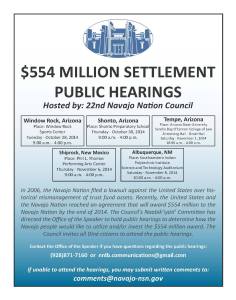 The settlement agreement, representing the largest single resolution in the more than 100 cases filed against the United States by American Indian tribes, was approved by the Navajo Nation Council in May and later signed by federal entities in September.

Pro Tem Bates said the funds cannot be used and/or invested until the ongoing legislative public hearings conclude, and legislation is introduced and approved by Council.

“It’s important for the public to know that there are protocols and policies in place to ensure the funds are secured,” added Pro Tem Bates. “The funds will not be accessed until the legislative process is carried out, which includes public notification and the opportunity for the public to issue comments during the mandated five-day comment period upon introduction of legislation.”

“Our intent is to keep the public informed and involved throughout the process,” said Pro Tem Bates. “I have repeatedly told our people during public hearings that we will notify the public when the funds are received and that time is upon us.”

Controller Mark Grant said a separate account has been established to hold the funds until legislation is drafted and approved by the Council.

“The funds are secured in a separate account at this time and the principle amount is earning interest at this time,” stated Grant.

Grant added that in accordance with the Navajo Nation Appropriations Act, 12% will go to the Permanent Trust Fund, two-percent to the Land Acquisition Fund, and four-percent for the Veterans Trust Fund, leaving a remaining balance of approximately $409 million.

Attorney fees totaling approximately $44.3 million will also be paid to the law firm that successfully negotiated the agreement with the guidance of the Naabik’iyátí’ Committee Trust Mismanagement Litigation Task Force.

According to Pro Tem Bates, the set-asides can be avoided if legislation is introduced and passed by Council. Doing so would allow for the principle balance to remain at approximately $509 million after attorney fees.

The next scheduled public hearing will take place Saturday, Nov. 8 beginning at 10:00 a.m. at the Southwestern Indian Polytechnic Institute’s Science and Technology Auditorium in Albuquerque.