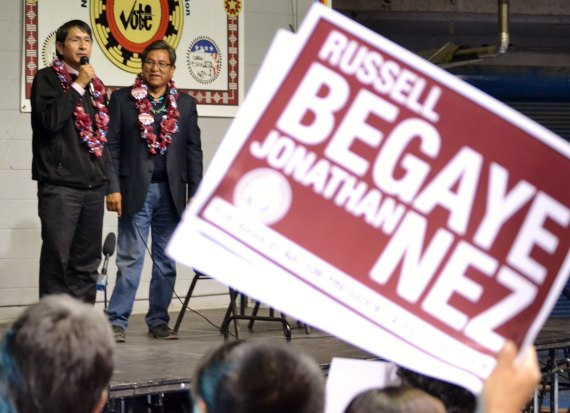 When it was obvious that Navajo Nation Vice President-elect Jonathan Nez and President-elect Russell Begaye had won the presidential election, they and hundreds of their supporters made a triumphant and very noisy entrance at the Sports Center at about 8 p.m. on April 21, 2015. Photo by Marley Shebala. (Please credit when reuing photo.)

WINDOW ROCK, Ariz. (5-4-15) – Navajo Nation President-elect Russell Begaye and Vice President-elect Jonathan Nez will take the oath of office during an inauguration ceremony on Tuesday, May 12, beginning at 10:30 a.m. at the Bee Hółdzil Fighting Scouts Events Center in Fort Defiance, Arizona. Doors will open at 8:30 a.m. ― the event is free and open to the public.

“We are very thankful for the support of the Navajo People and we invite all of the Navajo Nation, along with chapter, state, county, and federal officials, to celebrate with us on this very special occasion,” said Begaye.

Begaye and Nez were elected to the Office of the President and Vice President during a special election held on April 21.

Pax Harvey of Pax Harvey Consulting, will serve as the Master of Ceremonies, with the welcome address provided by Speaker LoRenzo Bates of the 23rd Navajo Nation Council.

Students from Window Rock High School will provide a Navajo song performance and students from Shiprock Associated School, Inc. will recite the Pledge of Allegiance at the start of the event.

“We must always remain mindful of our youth in anything we do, and so we feel it’s important to have Navajo students be a part of the event,” stated Nez.

Current Vice President Rex Lee Jim and William Lee, will perform a dedication and blessing ceremony for the new leaders upon the oath of office, followed by the inaugural address provided by Begaye and Nez.

The public is advised to arrive early to the event due to security screening. Safety precautions prohibit certain items from the facility such as alcohol, drugs, outside food or drinks, oversized bags, and weapons ― in accordance with policies of the Window Rock Unified School District.

For more information regarding the inauguration, please e-mail BNinauguration@gmail.com.