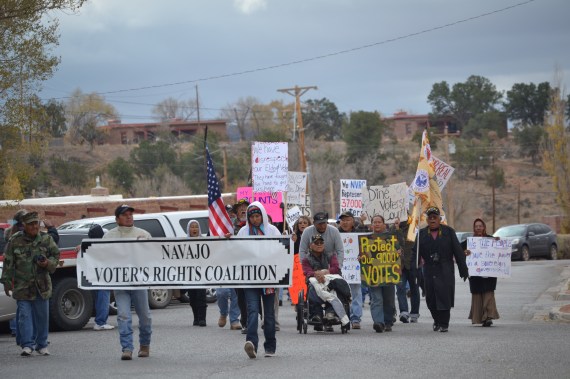 The Navajo Voters Rights Coalition protesting the failure of an over-ride of a presidential veto by the Navajo Nation Council on Nov. 13, 2014. The coalition marched from the Window Rock, Ariz., Mini-Mall to the Council chambers, Office of President and Vice President and back to the front of the Council chambers in Window Rock, Ariz., on Nov. 13, 2014. (Photo by Marley Shebala. If reusing, please provide proper photo credit.)

DELEGATE LEONARD TSOSIE
there are still navajo people, a good portion of them, wondering what is going on with the elections. they met on north side. it’s good to see people involved because we are doing something wrong. there was sign that there were over 38,000 votes for Chris Deschene and 19,000 votes for Joe Shirley Jr. To me the Navajo Supreme Court has deprived of the Navajo Nation of a leader. That is what I saw, 38,000 votes. i just wanted to say that and hope we don’t have illegitimate president.

DELEGATE ELMER BEGAY
one of constitutents living in Hopi Partition Lands and she is non-signer of lease with Hopi Tribe. Her name was Ida Clinton. She’s been there 90 years and she passed on yesterday. there are pple out there that don’t have electricity and roads have never been graded. and they are under threat from Hopi Tribe who say they will take livestock anytime they want. and there are two elders still out there who refuse to sign a lease with the Hopi Tribe.

DELEGATE WALTER PHELPS
The Navajo Oil and Gas charter is still pending and the Council has been holding off on taking action on NOG because of a forensic audit. The field audits are done. The Council voted for Legislation to be referred back to Resources & Development Committee and then for the Council to have a special session. I’m asking for the NOG charter to also be placed on that special session agenda.

SPEAKER PRO TEMP LORENZO BATES
i spoke with NOG Board Chairperson Leonard Eltsosie about audit and he said that the audit was being written up and that it needed to to go Board and then it would be released to Council.

DELEGATE NELSON BEGAYE
I too am disappointed with Navajo Election Office. I have been asking for election information regarding the votes of five of my chapters. I also feel that there are disenfranchised votes. And i finally received letter this morning and so now I have to wait until Dec. 23.

I asked for you, Speaker Navajo supreme court has no right to censor information. that information concerns disenfranchised votes. I ask for the Navajo Supreme Court Chief Justice Herb Yazzie to come before us and explain where he gets the authority to strip the Election Board of its power and disqualifying candidates for council. This election chaos is not the fault of the council, it is the fault of supreme court for not interpreting the laws the way they should.

SPEAKER PRO TEMP LORENZO BATES
I have drafted a letter and I’ll include a memo.

DELEGATE DWIGHT WITHERSPOON
delegate Tsosie indicated that there were these figures. my wife informed me that when our daughter tried to vote that the ballot box would kick out the ballot so i don’t know how those vote counts could be tallied.

SPEAKER PRO TEMP BATES
I drafted memo regarding Legislation 0081-14 and noted that any amendments of Veterans Trust Fund could be done by Full membership of Council, which is 12 votes and the legislation was 11 in favor, 8 opposed. And so passage of 0081-14 failed. My decision can be challenged and if my decision is over-ruled.

DELEGATE LEONARD TSOSIE
Delegate Witherspoon has big ego and I never accused him of that. And so I’ll clarify. We did not amend Veterans’ Trust Fund. What happened, based on documents I have, is that a group of lawyers in some corner over in the legislative building and decided that this is what they would do. they took plan of operation and put into statute and made it statute and so 0081-14 does not have tribal law section. This is what happens when do codification in different manner. so we didn’t amend Veterans’ Trust Fund. secondly in plan of operation that Budget & Finance Committee passed, the little standing committee tried to restrict the mother Navajo Council. and B&F has no authority to restrict Council. and since in plan of operation and not statute, what the Council did in approving 0081-14 was correct. And so I challenge. Delegate Charles Damon seconds Tsosie’s challenge.

DELEGATE DWIGHT WITHERSPOON
This is amending Veterans’ Trust Fund and this is not plan of operaation. and i get frustrated with my colleague, Delegate Tsosie, who refuses to accept decisions when it doesn’t go his way.

DELEGATE LEONARD TSOSIE
section 1171 was not law when Veterans’ Trsut Fund set up. 1171 was created when group of lawyers got together and decided to put into statute. and that is problem we are having. we allow people to make all these decisions and codify. my point is look at original legislation and we didn’t amend that yesterday. that is my point. whether took language out of here and put into section 1171, we didn’t amend this. i know Witherspoon wants his way.

DELEGATE ALTON SHEPHERD
as you recall when we took office, i brought legislation to council to amend Veteran’s Trust Fund, Title 12 Appropriations Act, to do 50-50 allocation to chapters and vote was 11 in favor, 8 opposed. and then chief legislative counsel said it needed 12 “yes” votes. And the heading of 0081-14 states that it is amending the Veterans’ Trust Fund, which is why i got support from veterans’ organizations. this is not a plan of operation. And I don’t believe challenge is appropriate because the challenge is about changing the law. and if the speaker pro temp decision is over-ruled then it could be vetoed by the president.

SPEAKER PRO TEMP BATES
with 22 members and appointment of Tso, now membership is at 23 so that automatically moved 2/3 vote to 16 so any vote from here on is 16. when the next appointment of the vacancy on the council is made, the 2/3 vote would continue to be 16.

DELEGATE DANNY SIMPSON
Mr. Speaker, you are to make ruling on floor rules, so where is the ruling?

SPEAKER PRO TEMP BATES
go to Rule 22 and my ruling is based on statute.