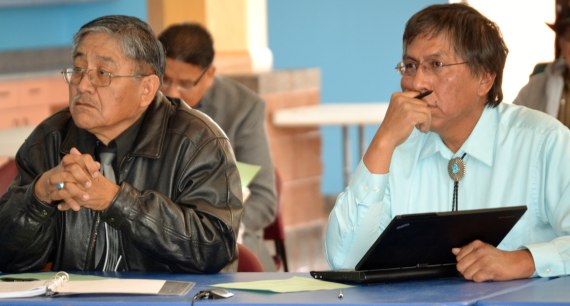 That was yesterday, March 17. I asked Tsosie why the RDC had asked for a work session of the Naabik’iyati Committee to be held at the downtown Phoenix Hyatt Regency on the Proposed Navajo Rangeland Management Act of 2014 instead of on Navajo land, especially since the focus of the work session is Navajo rangeland, which is of great concern to the constituents of the Navajo Council.

I added that the Navajo Council would be casting a negative image of itself to the People by meeting in downtown Phoenix on the proposed Rangeland Management Act. I also asked Tsosie about the cost to the People for their Public Servants to travel from their home towns to Phoenix, stay at the Phoenix Hyatt Regency for either two or three nights, have meals and probably work session snacks, receive meeting stipends, and conference room fees?

Tsosie’s answer: If you want, I’ll pay for my meals.

According to Public information from the Navajo Legislative Branch, the Naabik’iyati Committee will receive a POWER POINT presentation on the Proposed Rangeland Management Act of 2014 from the Navajo Nation Division of Natural Resources Department of Agriculture, which means the People will also be paying for the travel, lodging and meals of those tribal employees. The Division of Natural Resources director is Fred White, who is a political appointee of President Ben Shelly.

And since this is a Work Session, there is no need for a quorum of the Naabik’iyati Committee. Please note that the request for the work session in Phoenix came from RDC Chairperson Katherine Benally to Speaker Johnny Naize, who approved Benally’s request. And don’t forget that Benally was the MOST vocal supporter of Naize when Delegate Alton Shepherd sponsored two pieces of legislation on Jan. 28, 2014, to the Council for the removal of Naize as speaker after Naize was indicted for 11 criminal charges involving bribery and conspiracy to commit bribery. Shepherd filed new legislation, NUMBER 0069-14, for the Council to remove Naize after former Council Delegate Raymond Joe admitted in his Feb. 18, 2014, guilty plea that he and Naize conspired to commit bribery with the People’s Financial Assistance Program or Discretionary Fund. The Feb. 18, 2014, guilty plea of Joe is attached to 0069-14.

And will Naize be traveling to downtown Phoenix? Of course, because Naize, as speaker, presides over the Naabik’iyati Committee. And will any of Naize’s political appointees, such as his Chief of Staff Jarvis Williams, staff assistants Anthony Peterman, Darrell Tso Sr., and Ansley Curley, and public information officers Jared Touchin, Jolene Holgate and Chrissy Largo be traveling with Naize? Well, your guess is as good as mine. But if I was to guess, I would put my bet on Chief of Staff Williams and staff assistant Ansley Curley because they were both with Naize when Naize was arraigned on his 12 criminal charges before the Navajo Nation Window Rock, Ariz., District Court on March 11, 2014. And after Naize pleaded not guilty to all of his 12 charges, Curley left a few minutes before Williams and Naize walked out of the court room. I was wondering why Curley did that until I saw Curley drive up to the front of the court house behind the wheel of the black tribal government SUV assigned to the speaker. According to Navajo law, Naize is prohibited from using tribal government property and tribal employees for personal business and being arraigned on 12 criminal charges is definitely not tribal government business. Yes, an additional criminal charge of bribery was added to Naize’s 11 charges.

Naize is abusing the speaker’s position. And the position of speaker, like ALL the tribal government’s elected positions and political appointments, belong to the People. The People have a right to know how their elected officials are conducting tribal government business in our name. We also have a right and responsibility to have our Law Makers conduct business according to Navajo laws.

Yes, folks, we have a run-away Navajo government…

And before I end this post to begin working on my video of the RDC Subcommittee on Proposed Agreement between URI and the Navajo Nation for a Demonstration Project of In-Situ Uranium Mining near Church Rock, N.M., I almost obtained copies of a federal Environmental Impact Statement involving URI and a long awaited report from URI on its cleanup of Section 17 that URI handed out to the RDC, Navajo Department of Justice, and Navajo Environmental Protection Agency. But seconds before I had my hands on it, political appointee Stephen Etsitty, director of the NEPA, told NDOJ attorney Robert Taylor that I needed to make a WRITTEN request for the reports. 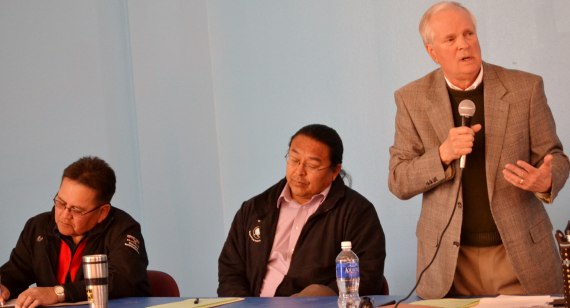 But all that information will be in another post. So stay tuned to stay informed about the Navajo Nation government. May Peace Prevail on Mother Earth!