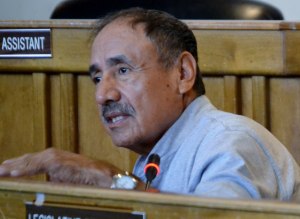 WATER RIGHTS COMMISSIONER RAY GILMORE
If Mr. President here, I say same thing, now is the time, political season, hot and windy and also that. We told him that the use of tribal police could cause a riot. (GILMORE WAS REFERRING TO RDC MEMBER LEONARD TSOSIE’S COMMENTS ABOUT TRIBAL POLICE PATTING DOWN PEOPLE ATTENDING PUBLIC HEARINGS ON SB 2109: NAVAJO HOPI LITTLE COLORADO RIVER WATER RIGHTS SETTLEMENT)
I don’t know about Attorney General Harrison Tsosie writing letter.
And the media and social media was used against LCR (SB 2109).
Commission members have been around the longest and there needs to be an examination. It’s needed. We’ll do self evaluation.

RDC MEMBER DELEGATE LEONARD TSOSIE
Replace the Water Rights Commissioner that have “no guts” with “gutsy” women, like Lena Fowler. We shud look at quality and the people that would stand up for water rights in a strong way. That should be the policy and not whether representative from certain agency. 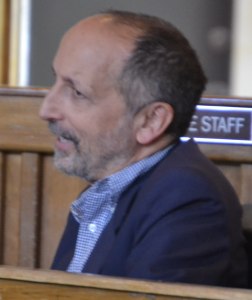 NAVAJO DEPARTMENT OF JUSTICE WATER RIGHTS ATTORNEY STANLEY POLLACK
There’s plenty of blame to go around. Before point fingers, we need to look in mirror.
2010 deal (San Juan Navajo Water Rights Settlement) that Council approved by more than 2/3 majority had similar terms as those in Navajo-Hopi Little Colorado River Settlement.
When talk about public education process, the water rights commission conducted over 90 briefings, including council sessions. Could they have done more? Yes everyone cud do more and lesion cud be learned.
When u say Little Colorado bigger fight, not so true. All water on little Colorado basin used by Navajo Nation, Page, Navajo Generating Stations uses bulk of water so Navajo controls water in Upper Colorado Basin.

RDC MEMBER LEONARD TSOSIE
I may praise you at times but at time you irritate me.

RDC MEMBER LEONARD TSOSIE
How do we begin to use Upper Colorado River? That is the plan I am talking about. So when you return to your conference room, don’t unnecessarily chastise the council and some pple are doing that.
This council has brought in largest amount of money – over a billion dollars and yet the media decides not to cite that. And so the citizens are not informed about the council doing its work beyond the call of duty.
We are stretched thin on meeting with chapters and giving reports. But I blame chapters that scheduled all meetings at first of month. I want ot report to chapter but chapters are not being cooperative.
But I’m accepting of that, like how tribal justice department not cooperating.
And I agree that water is sacred.

RDC CHAIRPERSON KATHERINE BENALLY
Yes we are blame. We saved ourselves from SB 2109. We didn’t support Navajo Water Rights Commission’s recommendation of SB 2109. If that is called a mistake then we made a good mistake.
I recall now why we opted for Water Rights Task Force. I would like to look at that legislation before we just pull that Task Force.
Programs and departments are coming forward now and probably because budgeting season.

RDC VICE CHAIRPERSON ROSCOE SMITH
I agree that was a good mistake.
And I just want to appreciate everyone efforts.

CLICK ON NAVAJO DEPARTMENT OF JUSTICE WATER RIGHTS UNIT AND YOU WILL BE TAKEN TO THAT SITE WHERE INFORMATION IS AVAILABLE ON CURRENT WATER LITIGATION.