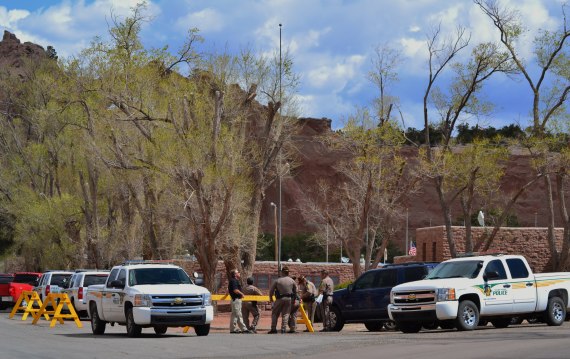 Navajo Nation police stand guard at the road entrance to the Council chambers in Window Rock, Ariz., on April 21, 2014. Photo by Marley Shebala.

And as I started to set up my video camera and lap top to begin posting tribal government activities from the floor of the Council chamber, tribal Police Officer Dana Tome walked up to me and asked me if I had permission to set up my camera equipment. She then asked for my Independent Media press credentials. I told her to talk to Speaker Pro Temp LoRenzo Bates, who has approved my return to the Council floor. Officer Tome said she was just asking for my press credentials and she didn’t want to go any further than that. Interesting…

I’ll get a copy of President Shelly’s State of the Nation address and post later. I was unable to begin blogging Shelly’s remarks because I got distracted by Officer Tome. By the way, Officer Dan Tome is the tribal police officer that unsuccessfully tried to EVICTEVICT then Navajo Nation Shiprock, N.M., Chapter President Duane “Chili” Yazzie from the Council chamber for sharply criticizing the Council. Yazzie has announced his tribal presidential candidacy.