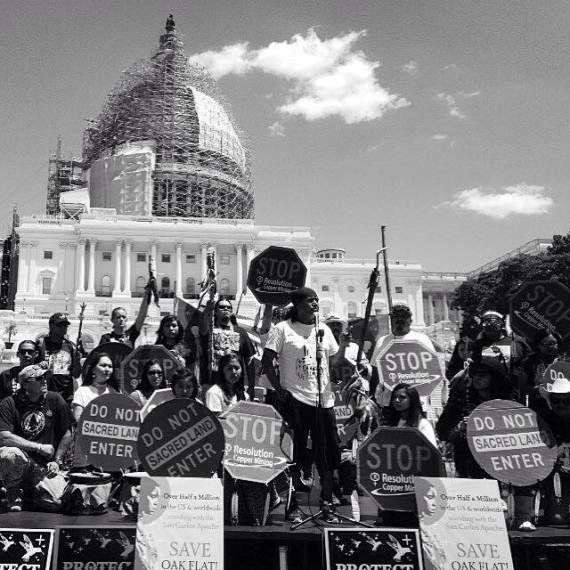 (Washington D.C.) – Yesterday afternoon, following the successful completion of Apache Stronghold (www.Apache-Stronghold.com) “Caravan to D.C.” And their “Save the Oak Flat Act Rally” on the West Lawn of the U.S. Capitol Building, some Apache Stronghold members – mostly grandmothers and young women – went to visit their Arizona representatives in Congress and talk with them about the Apaches national stand in defense of their sacred place known today as Oak Flat.

Oak Flat was named earlier this year as one of the 11 Most Endangered Historic Places in the United States by the National Trust for Historic Preservation.

Among those that the Apache Stronghold contingent visited was Rep. Paul Gosar (R-AZ, 4th Dist.). The purpose of their visit was to address a “Dear Colleague” letter that Rep. Paul Gosar recently sent out to fellow House members regarding the “Save Oak Flat Act” introduced by Rep. Raul Grijalva, with 17 bi partisan co-sponsors. In his letter, Rep. Gosar insulted the Apaches and called them “liars.”

Mrs. Vonda Cassadore of Bylas, Arizona, requested that Rep. Gosar come out of his back office briefly so that Mrs. Cassadore could ask him some questions about his “Dear Colleague” letter.

“Rep. Gosar has a record of intolerance and saying vicious things against Native Americans, but his behavior has now become stranger than ever,” said Apache Stronghold spokesperson Wendsler Nosie, Sr.
“There is no excuse for his mistreatment of the Apache grandmothers and young ladies who came to his office.

Cowering behind a locked door, refusing to come out, and then calling a squad of policemen to sweep those gentle ladies away is just terrible. Rep. Gosar should apologize for that, as well as for his strange and insulting ‘Dear Colleague’ letter.”