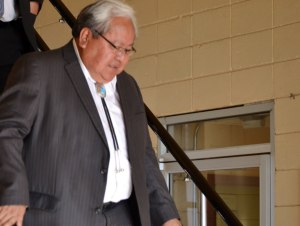 Navajo Nation Council Speaker Johnny Naize leaving the Navajo Nation Window Rock District Court on March 11, 2014, where he pleaded not guilty to all of his 12 criminal charges that were filed against him by the Navajo Nation Special Prosecutors. Photo by Marley Shebala

The Navajo Nation Special Prosecutors filed 11 criminal charges against Navajo Council Speaker Johnny Naize on Dec. 3, 2013, that were related to the alleged misuse of the tribal Financial Assistance Program, which later became known as the tribal discretionary funds or slush fund.

The additional charge that the Special Proseutors filed against Naize on Feb. 20, 2014, involved as bribery complaint against Willeto.

According to Nazie’s 143-pages of criminal charges, a total of $36,550 from the tribal Financial Assistance Program was diverted to Naize and his family through a scheme of “You scratch my back and I will scratch your back” that involved two delegates. Delegate A would authorize a certain amount of money to a family member of Delegate B, with the understanding that Delegate B would, in return, authorize an equivalent sum of money to Delegate A’s family member.

Under the Navajo Nation Ethics in Government Law, Delegates are prohibited from authorizing family assistance to a family member. And according to the Special Prosecutors, this scheme of “You scratch my back and I’ll scratch your back” had the same legal and procedural effect as authorizing financial assistance directly to one’s own family member, which made it illegal.

Today, April 4, 2014, the Council is having a one-day special session to deliberate and take action on LEGISLATION 0069-14, which is the removal of Naize as speaker. Naize will still be a delegate.