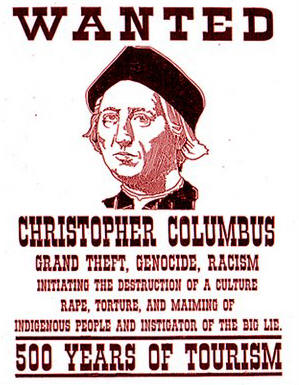 Greetings Relatives/Frens/Humans,
If you’ve read the introduction page of my website, you know that I’ve been a journalist for about 30 years now. As a journalist, my focus is on accuracy, fairness, the truth. The celebration of a serial killer, rapist is wrong, unhealthy, and promotes the continued racism and discrimination against the First Humans of this part of Mother Earth, which is why I support the Abolishment of Columbus Day. Please read the following letter from our children, who are attending the University of New Mexico-Albuquerque. They are asking for our support and we need to support them.
May Peace Prevail on Mother Earth!
==========================================
Yá’át’ééh abíní,
​​As many of us are closely tracking bills and proposals at the State legislature and in the Tribal arena there are still so many community led discussions and proposals moving at the local levels. ​Our communities are continuing to step up and lead for the virtues of our families and neighbors. Student led organizations at the University of New Mexico (UNM), including Kiva Club are asking for support from all students, faculty, staff, alumni, Indigenous Nations and the local community by releasing a Call to Action – Abolish Columbus Day at UNM.

​The Associated Students of the University of New Mexico (ASUNM) ​, ​ the representative body of the undergraduate students ​, is holding its Steering & Rules Committee meeting today to vote on Indigenous Peoples Day replacing Columbus Day. During the last ASUNM meeting two weeks ago the proposal was tabled for edits and feedback from all sponsored organizations. These organization’s are asking for your help to make history and reclaiming a day to honor and celebrate Indigenous people’s resistance, existence, and survival.

“I think it’s UNM’s duty to respect that and honor their students, because we’re not paying thousands of dollars to take crap like this.” -Cheyenne Antonio

The meeting will take place tonight, February 25th at UNM Student Union Building (SUB) 3rd floor in the Cherry & Silver​ room. If you are unable to attend the event please consider sharing this email with your contacts and writing a letter to be delivered or read to ASUNM at the meeting. Letters can be emailed to Cheyenne Antonio, Kiva Club President, at canton11@unm.edu.

Ah é ​’h éé ​, ​
Kelly Francisco
==========================================
STATEMENT BY TRANSFORM COLUMBUS DAY ALLICANCE: ​
Based in Denver, Colorado, the Transform Columbus Day Alliance [TCDA] is an international coalition of over eighty social justice organizations who are committed to challenging traditional ethnocentric views of Columbus as pioneer and sole discoverer of the Americas, and that he, as well as colonial powers, should be celebrated for 512 years of invasion, cruelty, oppression, and cultural imperialism.

TCDA has been protesting the Columbus Day parade in Denver since 1989, and calls for the unequivocal abolition of the Columbus Day holiday on a local, state and national level. The celebration of Columbus is the veneration of colonialism, conquest, and genocide. As people of conscience, we must move our society closer to the democratic values of equality for all, through historical accuracy, justice in the judicial and political processes of the country, and respect for diverse peoples and cultures.

To this end, TCDA actively works towards the repeal of the Columbus Day holiday throughout the United States, and the accurate historical portrayal of Christopher Columbus and his colonial relationship with native peoples.

The Transform Columbus Day Alliance is based upon mutual respect, sharing the perspective that Columbus Day is an inherently racist statement of cultural domination. Celebrations honoring Columbus reinforce a historical process of racism, theft, lies, murder, slavery and the destruction of the environment. Individually and collectively, we reject Columbus as a heroic personality, and we reject holidays, celebrations or other expressions of adulation for Columbus.

This Alliance is dedicated to the transformation of the Columbus holiday from a hateful, racist holiday that celebrates conquest and domination to a respectful celebration that calls for a future for the Americas without racism, exploitation, or state/corporate domination.

We agree that the process of genocide begun by Columbus continues to the present against the indigenous peoples of the Americas. The Columbus legacy proceeds today in, among other ways, neoliberalism and globalization. We pledge ourselves to active, open opposition to the Columbus legacy in all of its forms.

We also agree that Columbus began the transatlantic slave trade in both Indian and , the consequences of which remain inadequately addressed by the societies that benefited from these genocidal practices. For commencing the slave trade in the Americas, Columbus deserves no national, state or local celebration.

Columbus celebrations promote theories and practices of racial supremacy and superiority, namely that Columbus should be celebrated for the commencement of the justifiable invasion and conquest of the Americas. Consequently, the destruction of the indigenous peoples of the Americas and Africa is considered to be an acceptable cost for the construction of the current settler societies of the Western Hemisphere. We denounce these theories and practices.

We repudiate the concept of “discovery,” which is not merely a rhetorical description of Columbus’ endeavor, but has been extended into specific legal and political doctrines that have been, and continue to be, used for the destruction of indigenous peoples. Columbus is the source of the discovery doctrine, and must be rejected.

Our opposition to Columbus and Columbus Day is not anti-Italian. We celebrate the beautiful, positive contributions of Italians around the globe. We acknowledge the history of discrimination and exclusion that has been experienced by Italians in the U.S., and we condemn those practices. In the same vein, we reject the position that Italian culture can or should be a celebration of colonization and slavery. We encourage all Italians and Italian-Americans of good will to celebrate their culture by repudiating Columbus and by joining those Italians/Italian Americans in this Alliance.

Members of the Transform Columbus Day Alliance collaborate under the principles of autonomous, decentralized, mutually-respectful decision making. Individuals, groups or organizations that endorse these principles are welcome to join this alliance.

The Alliance acknowledges a diversity of tactics in combating the Columbus legacy, ranging from education to direct action.

We condemn all efforts by state and corporate powers to limit popular political organizing and action.

In this vein, we encourage all members of the alliance to oppose, resist and frustrate state/corporate attempts to infiltrate, subvert or destroy our common will.