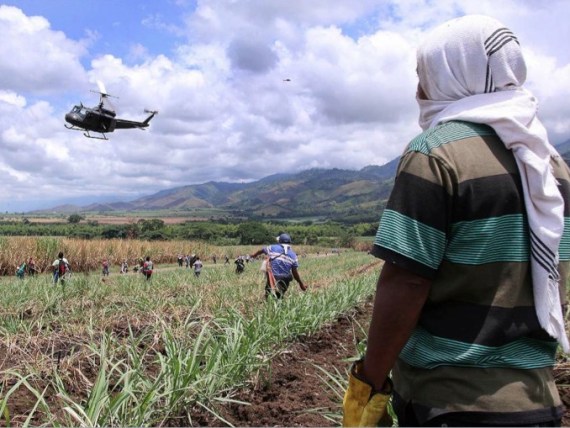 March 4, 2015, STATEMENT by representatives Original Nations of the Great Turtle Island Abya Yala North, from the United States and Canada gathered at the Nahuacalli, Embassy of Indigenous Peoples in Phoenix, Arizona in Working Group session of the Continental Network of Communications and Media Abya Yala from March 3–5, 2015 regarding the Human Rights crisis in the Cauca Territories of the Nasa Nation [Colombia]: 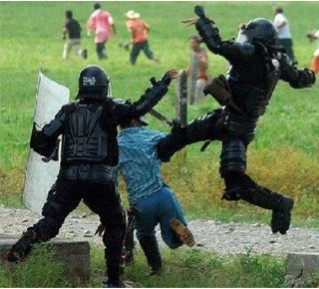 Regarding the events now occurring in Cauca where the legitimate right of Indigenous Peoples of Cauca [Colombia] in the exercise of the liberation of Mother Earth has been the target of state violence by the security forces of the Colombian government, violating the life, physical integrity, individual and collective rights of indigenous peoples:

We reject these violations, and alerted the world to be aware of these facts, which threatening again our indigenous peoples who are victims of systematic attacks violating our essential rights; fomenting stigmatization, harassment, threats against our leaders, persecutions and the criminalization of legitimate protest. 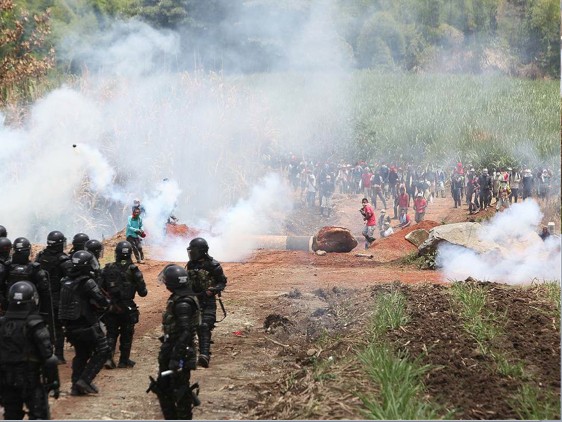 Let it be clarified that the indigenous nations of Cauca are acting in Defense of Mother Earth in their Territories, are not calling for violence. We demand the government of Colombia to not target these relatives of ours as terrorists, or use the true terror and weaponry of the state to repress legitimate actions, in peaceful protest and legitimate claim to Indigenous Territory.

We also call upon the media not to create more confusion and manipulation of information regarding the facts, as these acts of irresponsibility lend to the assault on our life, our dignity and self-determination of as Indigenous Peoples. 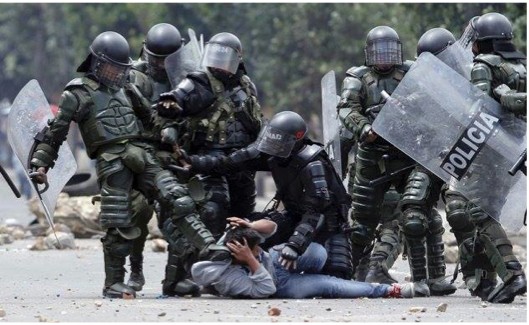 We reject and condemn emphatically:

1. The wounding inflicted by the ESMAD (Mobile Riot Squads) to more than 50 Nasa Nation members acting in the liberation of Mother Earth in northern Cauca.

3. We reject the vile murder of our indigenous brother GERSAIN FERNANDEZ RIVERA, a native of the village Caparrosa Pitayó Indian Reserve, Cauca, Colombia at the murderous hands of a task force tied to the Colombian army. 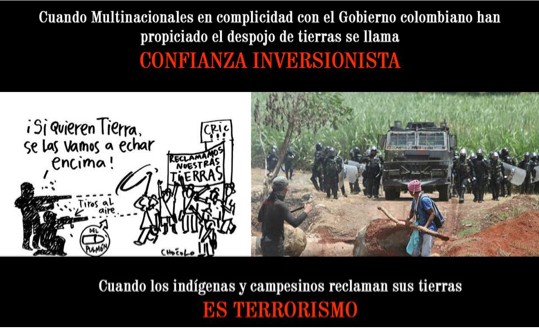 • Immediate Guarantees from the Presidency of the Republic and all entities and institutions of the Colombian State for the fundamental Human Rights of the Indigenous Peoples of the Cauca in the development of legitimate actions for the liberation of Mother Earth in their territories, in observance of all guaranteed national and international standards as subscribed in the various instruments regarding Human Rights.

• We call for the Ministry of Defense and Armed Forces to immediately cease all warlike military actions against our indigenous peoples, which we consider an excessive use of force and report on the specific events here referenced as severe violations of Human Rights to the appropriate Human Rights bodies.

• We call upon the office of Attorney General to initiate relevant investigations regarding the systematic violations of human rights against Indigenous Peoples of the Cauca as identified.

• We call upon the Office of the Presidential Adviser for Human Rights, invoking the function of that position to channel every effort to ensure the legality and respect for Fundamental Human Rights of Indigenous Peoples of the in the department of Cauca.

• We call upon all the international agencies of Human Rights (UNHCR, OHCHR, UNDP, IACHR, ICRC and others) and other civil society organizations (CODHES, CCJAR, INDEPAZ, etc.), that in the context of their respective duties in defense of Human Rights, to DEMAND of the Colombian State accountability and concrete actions to realize the necessary guarantees and protection for Human Rights in Cauca, and to inform the national and international community about the grave situation facing our Indigenous Peoples in Cauca [Colombia] in the shadow of the latent risk of physical and cultural extinction we face today. 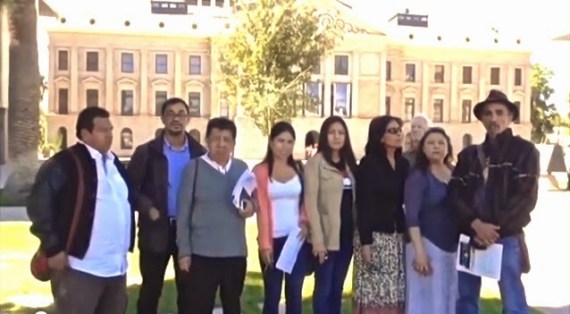 Continental Network of Communications and Media ABYA YALA Calls for Recognition – Respect – Guarantees for the Nasa Nation of the Cauca [Colombia] in their fight to protect Mother Earth and their territories.