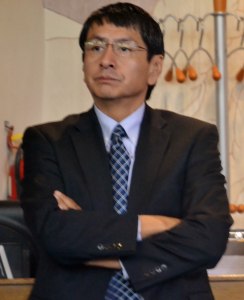 HERE AT NAABIK’IYATI COMMITTEE WHERE COMMITTEE HAS STARTED DEBATING ON LEGISLATION 0232-14, 2015 COMPREHENSIVE NAVAJO NATION GOVERNMENT OPERATING BUDGET. NOTE – I TRIED GETTING A COPY OF THE ENTIRE PROPOSED 2015 BUDGET BUT NO SUCCESS SO I’M PUTTING FORTH MY BEST EFFORT IN KEEPING UP WITH THE VERBAL REPORT BY BUDGET & FINANCE COMMITTEE VICE CHAIRPERSON JONATHAN NEZ, WHO IS BEING ASSISTED BY NAVAJO NATION CONTROLLER MARK GRANT, NAVAJO NATION EXECUTIVE OFFICE CHIEF OF STAFF ARBIN MITCHELL, NAVAJO NATION OFFICE OF MANAGEMENT AND BUDGETS DIRECTOR DOMINIC BEYAL.

DELEGATE DANNY SIMPSON
It’s our laws. our laws are blocking business development. Look at Navajo Oil and Gas. The issues with NOG is stopping all these convenience stores across the reservation. and now we are blaming our Regional Business development Office. Let’s amend our laws first. most of our people are going off reservation to start their business. i know young Navajo lady who tried to start a business for three years but it was the laws that blocked her. she went to Farmington, NM, and got her business started in a few weeks.

NAVAJO NATION DEPUTY ATTORNEY GENERAL DANA BOBROFF
If you are taking money from position that is filled, then all notices need to be done. I’m not saying you can’t do. I’m saying that there are issues and that processes have to be fulfilled.

NAVAJO NATION EXECUTIVE OFFICE CHIEF OF STAFF ARBIN MITCHELL
The issue is Business Site Leases and we are on right direction but the problem is infrastructure – water, electricity, offices. And with $9.5 million for Capital Improvement Projects, that will happen. The issue is also lease approval by Bureau of Indian Affairs, which the Navajo Nation took back from the BIA and that speeds up the process now. And there is the issue of land clearances so we are putting more funding into the tribal land office. And regarding this amendment, we don’t want to create hardship. There is a personnel process when positions are to be eliminated. and there was letter from President Shelly to Budget & Finance Committee that asked for Executive Office budget to not be amended.

DELEGATE LEONARD TSOSIE
you make policy decisions through budget. when performance not there, you ask, who are you serving and the navajo people are the ones being served. so how tell people that we funded program at $6 million wen performance was zero. and look around you, there are no division directors. i understand tribal justice department a little lazy and don’t want to make layoff notices so they can have supervisor tell employee of impending changes. jobs are not guaranteed. we are funding two road departments – BIA Roads and Navajo Division of Transportation. How crazy is that. so how do we respect the navajo people and zero performance. we asked director if one business was opened and he said no. it’s not because i don’t have heart. i do have a heart. these pple can reapply for employment. Resources & Development Committee approved convenience store at Twin Arrows. Otherwise if we allow 2015 budget to reamin as is then we are 24 rubben stamps.