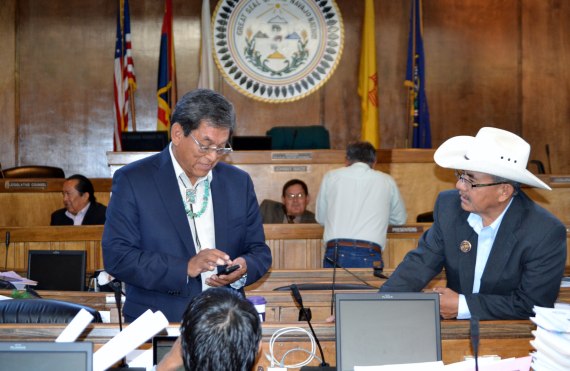 According to a Nov. 4, 2014, Committee for Begaye for Navajo President https://drive.google.com/file/d/0B7xhIWpNuJXibG85SUNZYmExZXpfVUxCQkEyVDNBc00wajE4/view?usp=sharing, that the NavaJo Election Administration notified Begaye that his name would appear on the ballot as a presidential candidate. The notification from the election office came after the Oct. 31, 2014, Navajo Supreme Court’s decision on Oct. 31, 2014 relating to Tsosie and Whitethorne v. Navajo Board of Election Supervisors and Navajo Election Administration, No. SC-CV-68-14.

Lynettee Willie, Begaye’s public information officer, stated that the date for the special presidential election has not been determined, but Begaye has officially started his campaign and he is moving forward with campaign activities.

“I do humbly accept this opportunity and look forward to advancing a successful campaign,” Begaye stated, “For the past four years, I have gained valuable experience that has allowed me to understand the impact that policies have on our Nation, our communities, and our people. I am committed to finding effective solutions for the problems that our Nation faces. I am committed to change, committed to putting the Navajo people first, and that’s why I am running for Navajo Nation President.”

“I entered this campaign in April, but I do not think anyone could have anticipated these recent events,” Begaye stated. “The election turmoil has created disharmony and caused some people to doubt the Navajo leadership. I believe we need to acknowledge this movement and realize that together we can make huge strides to not only avoid future conflicts but to strengthen our governance structure and sovereignty. I strongly believe that every citizen has a voice to be heard and I value the input and suggestions from all to improve our Navajo Nation.”

She explained existing company policies limit financial decisions of the corporation to specific employees and shareholders do not have a role in those decisions.

Willie, who is a former oil and gas company public information officer, added that each shareholder meeting is recorded and the minutes are archived to indicate any actions taken during a meeting.

“The filing of McLaughlin’s motion appears to have been done with the intent to discredit Russell Begaye and maliciously slander his reputation, former Oil and Gas Company Chief Executive Officer Robert Joe stated. “He has honorably and effectively served his people by serving as a NNOGC shareholder. People should understand that as a shareholder, Begaye at no time had access or control over any NNOGC funds, so it is completely false to imply that he committed any wrongdoing.”

“McLaughlin has never asked me about my role as a shareholder for NNOGC,” Begaye stated. “I know he has no personal access to NNOGC documents, so I can only assume the motion he submitted was written by and provided to McLaughlin from those unscrupulous individuals who are adamantly against my candidacy—the same individuals who are involved in the entire NNOGC conflict. This is very disappointing because their political tactics and attacks not only hurt the Navajo people but they threaten the stability of our Nation.”