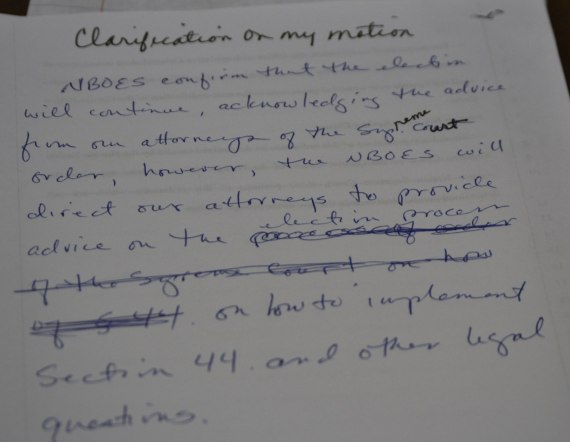 Here at special election board meeting at the conference room in the Quality Inn business complex. It’s now 9:22 a.m. and the meeting was scheduled to begin at 9 a.m. The only item on its agenda is 2014 General Election. Yesterday the board voted 8 in favor, 0 opposed to continue with the elections, in a special meeting in afternoon. The exact language is: “Navajo Board of Election Supervisors confirm that the election will continue; acknowledging the advice of our attorneys of the Supreme Court order, however the NBOES will direct our attorneys to provide advice on the election process on how to implement Section 44 and other legal questions.”

Section 44 is the election law that mandates that when a candidate is disqualified that the next candidate move up into the position of the disqualified candidate.

Yesterday, the board met and went into executive session for about two hours with Navajo Nation Attorney General Harrison Tsosie, Chief Legislative Counsel Levon Henry and legislative attorney Ron Haven to discuss the Navajo Nation Supreme Court’s decision to grant a Writ of Mandamus against the Election Office and Election Board that orders the office and board to comply with tribal election laws that mandate that the third place runner up in the primary election be moved up into the position vacated by presidential candidate Chris Deschene after the Navajo Office of Hearings and Appeals disqualified him for violating the election law that prohibits a candidate from lying on their affidavit of candidacy, In Deschene’s case, it involved Deschene swearing that he stated that he spoke the Navajo language fluently.

The Board had met in the morning as a regular meeting of the board. Election Board Vice Chairperson Tom White announced before the meeting that the meeting would probably start late because the board was waiting for the Supreme Court’s decision on the writ.

But when Board Chairperson Wallace Charley arrived he immediately called the meeting to order and the board zipped through its agenda and adjourned without receiving Supreme Court decision. But before adjourning, the board directed Navajo Election staff to place the Supreme Court decision on the Writ of Mandamus on its Nov. 14, 2014, regular board meeting.

CHARLEY asks Chief Legislative Counsel Levon Henry to explain Legislation 0289-14, An Action Relating To An Emergency; To Address A Matter Which
Directly Threatens The Sovereignty Of The Navajo Nation; Amending Language
Requirements Of The Navajo Nation, which the council approved early this morning.

CHIEF LEGISLATIVE COUNSEL HENRY
there were attempts to make amendments but there were no changes. It does changle Title 11 for qualifications for elected offices that now includes Navajo language provision. Underlying language requirement says that people will determine the language qualification of their leaders.

page 8 of 9: effective date and attempts to change and all amendments failed so language remains

LENORA FULTON
we had lesson from Attorney General Harrison Tsosie that we have three branch government. I have before me is now a law when President Shelly signs. I appreciate that for people to have opportunity to choose leaders and that people are supreme in government. and that government took as emergency to resolve.

WALLACE CHARLEY
tell us exactly, if president signs what exactly happens to those labelled as unqualified, are they back on?

CHIEF LEGISLATIVE COUNSEL HENRY
there are a couple of things happening right now and this question asked last night on its impact to candidate disqualified. we all know that supreme court issued WRIT and we all know what it says about their interpretation of section 44 regarding the moving up of third place. and there is also appeal from deschene of dismissed of his appeal on technicality. last night i said i don’t know what will happen if used by any candidate because also affects all positions from president, vice president, council delegates, chapter.

WALLACE CHARLEY
who would provide straight answer to us?

chief legislative counsel HENRY
i don’t cknow because its up to cadidate how use.

WALLACE CHARLEY
four years ago, the school board eligible and they applied and council changed law in middle of game. supreme court made retroactive and disqualifid several candidates so i expect chief justice to do that again regarding retroactive.

does this legislation supercede the supreme court order?

chief legislative counsel henry
supreme court order says third place moves up and again how 0289-14 ued. i got handed complaint against Board and Office for declaratory judgement and injunctive relief from voters but asking court for order from WR court for temporary restraining order to stop board and office from reprinting ballots.

election suprevisor LENORA FULTON
it ‘s up to citizens to file and i don’t want to see board and office being held hostage.

election board chairperson WALACE CHARLEY
probably at legislative office and will be takne to president and i expect president to sign. and i think that there is a certain number of days to comply with order so we have to wait for 0289-14 to be signed and then we can say election is on and everything goes on. can we wait on everything? maybe until monday. and when signed we can use to make decision. we still have authority to have ballots printed. we can do that. right legislative counsel?

election supervisor lenora fulton
when we get advice from attorneys, we should go into executive session.

election supervisor frannie george
there are other legislation for the council. when are those being reviewed and would help our cause here. i like idea of returning monday and everything available for us to look at.

chief legislative counsel levon henry
there are other legislation. emergency legislation regarding challenges and may be first thing on agenda.

board vice chairperson tom white
to Mr. Wauneka, in the meantime, people are voting and i heard that you ran out of ballots?

election supervisor jonathan tso
is there resolution drafted to comply with court order? perhaps if one not formulated, we should get drafted and presented to us by monday.

election supervisors lenora fulton and ruth watson mnotion for exective sessoin. vote is 6 in favor, 2 opposed at 9:59 am.

it is now 10:46 am and board remains behind closed doors.