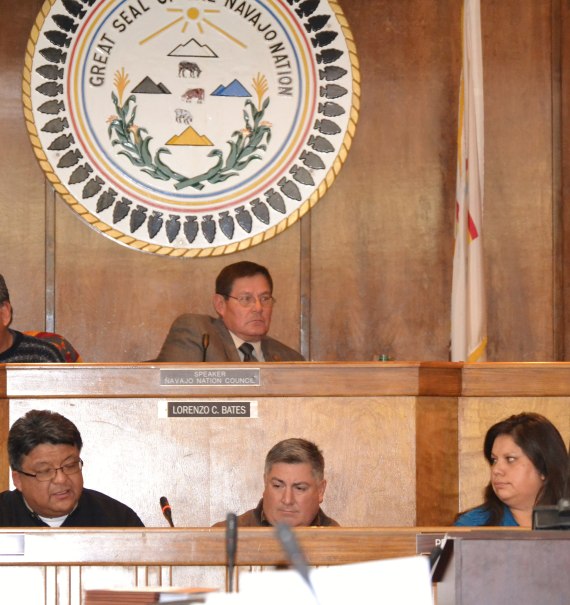 Navajo Council is now on Reports. The first report is from Gallup City Mayor Jackie McKinney on city’s Detox Center.

DELEGATE EDMUND YAZZIE
Detox is located east side of Gallup and where people walking streets are placed there adn this program has been going strong for quite some time. There is issue over city tax. And city officials asking for Navajo nation and other surrounding tribes to financially support Detox Center.

I remember when i was with sheriff’s department and it was 25 below zero and we were ordered by sheriff to take homeless to detox center to stay warm. but right now there are a lot of questions and i thank you for putting on agenda. tonight it will drop below zero again.

I’m going to ask for tribe “to cut to the chase” and fund Detox Center. We have lost four individuals already this week. a town hall meeting was scheduled a couple of weeks ago and more then 200 people showed up. this is not a racial issue.

NEW MEXICO SEN. GEORGE MUNOZ
25 years ago there was a walk to change the DWI laws and liquor laws and funding for Detox Center. my father Everett Munoz didn’t walk to have money moved. if mayor of page or farmington want funding then they should walk or horseback ride to santa fe. three deaths in one day. if this was a mine, there would be legislation to fix problem. but these are people that don’t have voice or speak. we have hearts. i’ve done everything but beg and i’ll beg today because people are dying. and there is no reason for them to die. but if we don’t come to resolution then the people will walk or horseback ride again and this time it will be to Window Rock. It may not be one of my family members or Edmund Yazzie’s family member but it is someone’s family member.

recently i asked if homeless, those that were not intoxicated, would be allowed to use Detox Center. there are liabilities. there are quick fixes. there are studies that show that Gallup has the highest need to address alcoholism and homelessness. we are asking you to help us lobby state legislature. 1981 removed city’s authority over alcohol sales. who needs to buy package liquor at 7 a.m.

DELEGATE DWIGHT WITHERSPOON
Navajo Nation has contributed. We have contributed about $1.6 million and we are operating the Gallup Detox Center. But Gallup has only contributed about $200,000 while taking in about $1.6 million in liquor sale. I don’t see response from Gallup. If you want to contribute half of what tribe expended that would be appreciated to hire staff to protect liability of entity. To allow for homeless to increase that ratio, it put staff at risk. it is not a hotel. my concern goes to MAYBE shutting down Detox Center so Gallup and State will address alcohol sales. I’m almost offended by plea. You have to look at behavior.

DELEGATE JONATHAN HALE
the decision to take over Detox Center was spur of the moment. it was only matter of time when this would hit and now it’s here. there were recomendations. the council’s health, education and human services committee wants amendments to state liquor laws. and navajo department of health is in its infancy. it will eventually change and that will involve the DOH contracting out services. and it’s not only gallup with individuals dying from exposure. there are other border towns facing that. so we welcome city mayors and state legislators coming to council to meet with us. there are other issues – busing, stem. there are pointing fingers now. and policies need to change regarding homeless which involves Executive Branch so as government, we can build on those. people take credit for positive action but where is the credit when a family loses their relative.

DELEGATE ALTON SHEPHERD
the route we are being asked to go is not the route we should go. leadership of city and state have different priorities. challenge to you, there is that phrase ‘representation by taxation” and the people, our people, that buy liquor and pay sales tax are not represented. the navajo people contribute to economy and nothing comes back. recently city of gallup decided have election for additional tax to pay for water and Navajo people are paying that tax, along with hotel expansion. so we need to go into other direction, where is our representation by taxation. secondly shut down lot of these bars. Gallup is known as Drunk Town USA. there are a lot of violations and look at next report, we are asking for a bar to be shut down in little town where there are three bars. lastly i don’t know if it’s time to legalize alcohol. maybe we need referendum. we get federal funding. we don’t need Detox center; we need treatment to come away from disease that they don’t have strength to do on their own. the 23rd Council is coming and the question before them will be how to prioritize this here and at state, city and county level. i’m looking forward to different direction.

DELEGATE KATHERINE BENALLY
how much money do we give to you? why won’t you put back into rehabilitation? but today sing another tune with Delegate Edmund Yazzie. Can we work together? My understanding is you want Navajo Department of Health to assume Detox Center and institute limited holding time. so how do we come to agreement for treatment and what you are asking for? we need to come up with plan and you need to contribute more than $200,000. the road, highly traveled by Navajo, but back road to Wal Mart needs repair. why won’t you repair it? is it because we are only ones that travel on it? it is cracking up, folding up. we pour millions into gallup and probably take drop. that is where we lost three navajo people on road. we also lost couple of people at Detox Center. Are you transferring liability to Navajo? while you collect money from those that don’t stay in town, return here and we deal with them so how will you deal with that?

DELEGATE LEONARD TSOSIE
The attraction of liquor is there, in a huge volumn. how do we limit flow of liquor? when it is so easily available it’s attractive. i agree we need to have solutions. i believe Gallup has over its quota of liquor licenses and when you allow transfer of liquor license from one bad dealer to another, you allow bad behavior to continue. we need to limit liquor licenses. maybe we can address thru state legislator.

I always thought that there should be Indian Center in Gallup especially with amount of money that we bring to Gallup. There is federal BIA land north of Gallup, near Flea Market where Navajo could turnover to Navajo for center for our people visiting Gallup.

NM SEN. GEORGE MUNOZ
I agree that there needs to be summit. We have Gallup organization, Share and Care. I would ask you to involve Carl Smith. I have never seen $1.6 million budget that Navajo Nation Department of Health has expended. I don’t know the budget expended by Gallup. And like Delegate Yazzie said we need to think about those individuals on street when we lay down on our pillows in our homes.

GALLUP MAYOR JACKIE MCKINNEY
i also have not seen $1.6 million budget expended by Navajo Health Department. And Gallup liquor sales are about $1.1 million. Answer for liquor sales and tax is proposed legislation for Gallup government to regulate liquor sales.

gallup putting in $80 million for Navajo Gallup Water Pipeline. currently we have agreement with Jicarilla for water but I’d like to have agreement with Navajo which has more water. i’d like better quality of life for community. we have young people coming to gallup because of lack of jobs on reservation.

NAVAJO HEALTH DEPARTMENT HEALTH ADMINISTRATOR THERESA GALVIN
Thank detox center staff for mental and physical anguish that they experience. I did 12 hour shift to see what they go through to provide services for Navajo and non-Navajo clients.

DELEGATE MEL BEGAY
liquor business takes in individuals as long as that individual has money to buy liquor. once their money is gone. we have people being run over by vehicles and trains during summer season. so this is prime time to address all our concerns and to be good neighbors and to help those that are disadvantaged. thank you mayor and senator for your attention.