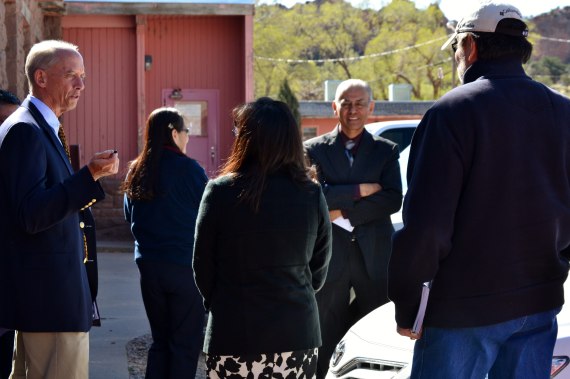 (Far left) Navajo Nation Department of Justice attorney Henry Howe talks with his clients during recess in Navajo Labor Commission hearing for complaint filed by five former tribal employees against tribal Controller Mark Grant for illegally laying them off. Grant is on the right and facing camera. Labor hearing at Window Rock, Ariz., on May 13, 2014. Photo by Marley Shebala.

Here at Navajo Labor Commission hearing where Commission is hearing Office of Navajo Labor Relations complaint filed by five former senior accountants against Controller Mark Grant for illegally laying them off in September 2013.

Controller Mark Grant is first witness.
about 60 percent from tribal revenues and 40 percent from state and federal funds. in 2013, budget cut from $7 million to $5 million. we complained to President Shelly couldn’t operate and so final budget $6 million. $926,000 total budget cut for 2013. The President’s Budget Review Team felt needed extra funds for other projects and they create pool and then disburse to other programs. Revenue projection for 2013 actually increased but we had a budget cuts, most of tribal programs. Some programs got ten percent cut but we got some funds back. But we also got less from Indirect Costs.

In July 2012, we got notified that our budget would be cut and we had meeting with employees and informed them of possible layoffs. Meeting was around July 19, 2014. We is our managers, who are Lena Arviso, Lorena Eldridge, Jancie Haskie, Isabell Haskie, Laurau Johnson, Harry Tso, Louise Johnson, others.

we informed employees look at attendance and performance. the employees didn’t come to me to voice concerns. there was little bit of disbelief and employees slowly returned to desks.

office of the controller is purely personnel division so 95 percent of budget is for personnel. Because facing $2 million, the initial plan was to layoff 39 employees.

He emailed announcement of possible layoffs due to budget cut to all his employees. We had hoped to identify more money, increase revenue projections so no budget cuts.

the annual budget has been decreasing and so here is historical disscription. when tribe gets cost of living increase, step increase then everybody gets increase in pay. say have $100 personnel budget and pay increases go from $90 to $95 so operating costs suffer. at some point get squeezed so much that have to have layoffs. in 2012, we got to point where we could no longer dip into operating costs.

we went thru many different scenarios and even pulled funds from property to supplement our budget which had them take hit. we removed consultants. so we did a lot of maneuvering so layoffs minimized.

Took bottom 39 and looked at closely after evaluated staff by attendance, performance…instructed managers that layoffs would be equal to each department. only exception was payroll because have to have paychecks for more than 6,000 employees, it needs to be accurate since Internal Revenue Service involved as employees file income tax.

when we went thru budget cuts, there were staff planning to resign, vacant positions were counted and so 11 actually laid off.

Qualifications: we have job qualifications for accounting positions that require BS in business or finance and many employees classified as accountants are not qualified. the reason why have unqualified employees goes back to old system of having equavalent amount of experience. one problem having and goes back to audit and audit cites us that we don’t have enough qualified degreed accountants on staff and CPAs on staff. we worked with personnel for long time and we changed job qualification so must have degree in accounting or business management. what we did is we met with personnel and they told us you have to layoff 90 percent of staff. we said stop we can’t do that. we reached agreement that individuals in position would be grandfathered in but once vacant then that individual must have degree.

at time of layoff, we have about 6 or 7 degreed accountants in office of controller so about 45 or 50 grandfathered in cuz didn’t meet qualifications.

we wanted to make sure that we identified individuals who were not meeting performance standards of the office. we looked at those individuals constantly late for work, calling in at last minute, job performance without looking at degree status so fair to everybody. we cud have said save the degree employees.

Veteran Status: what we did is we wanted to make sure that everybody performing their job and tht is the most important thing for controller office where lot of money going through office. when veteran identified we checked to make sure not borderline case and included in layoff.

CONTROLLER MARK GRANT
we tried to retain veteran but they were not up to par within their group. we have quite a few veterans, probably about 7 or 8 veterans. Mr. Smiley only veteran that didn’t make the cut.

my part in the development of the matrix to identify layoffs was to make fair. i met with managers several times on the development of the matrix and the weight/scores given to each area. very important attendance which was 30 percent. individuals taking excess leave and important for everyone to be on job working. Qualifications was 25 percent – did they meet minimum qualifications to meet job. and i think was for new qualifications. Performance: are they getting job done; are they able to get job done which results in accounts not getting closed out, financial info not uploaded properly, etc. Managers have log sheet on how many JDs done and how many closed out. so easy go on system and verify numbers. might be most accurate but slow so important to be fast and accurate in Controller Office. CONDUCT: important get along with supervisors and managers and clients. lot of employees will have some type of conduct. WORK RECORD: where we look at how they are taking leave, working with clients and co-workers. ATTENDANCE simple, are you here or not and are you calling at last minute to say not be in. SENIORITY: 5 percent and number of years on job. More important get job done.

Manager meet with supervisor, fill in numbers, go thru scoring system. Laura Johnson Nez met with three supervisors. At some point, identified who would be laid off and bring to managers’ meeting. Final scores on Exhibit 10 were from meetings between managers, supervisors and Controller Mark Grant.

The list of layoffs changed a little bit but once got data and criteria then names didn’t change that much. In beginning said layoff four and then three. also said if have vacancy or retire then counted towards total layoffs needed.