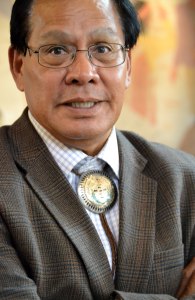 Navajo Nation Council Delegate Lorenzo Curley was the sponsor of two pieces of legislation that the Council refused to accept as emergency legislation during their special session at the Council chambers in Window Rock, Ariz., on Oct. 2, 2014. Photo by Marley Shebala (Give proper credit when reusing)

After the Navajo Nation Council adjourned voted to adjourn to its special session at 12:32 p.m. today, Oct. 2, 2014, Council Delegate Lorenzo Curley said in an interview that he had withdrawn legislation 0218-14, which was to remove the Navajo language fluency requirement for presidential candidates and the optional Navajo language requirement for other political candidates, which included Council delegates.

The withdrawal of 0281-14 means that it no longer exists.

Curley said he also withdrew legislation 0282-14, which was for the Council to vote on a new speaker. After Speaker Johnny Naize resigned as speaker and Council delegate, the position of speaker officially became vacant.

Curley, with total frustration in his voice, said that there was no sense in moving forward with 0281-14 and 0282-14 because his sponsorship of both pieces of legislation was for the Council to treat the two legislation as emergency legislation and vote on both them during today’s special session.

He noted that 0281-14 was to stop the “disenfranchisement” of the more than 9,000 voters, who voted for presidential candidate Chris Deschene during the primary election, which could happen tomorrow, Oct. 3, 2014, if the Navajo Nation Office of Hearings and Appeals disqualified Deschene as a presidential candidate because he desn’t meet the Navajo language fluency requirement.

Curley said that his withdrawal of legislation for the Council to vote on a new speaker, which could have been Speaker Pro Temp Bates he added, was also because he thought the Council would act on legislation 0282-14 as emergency legislation today, Oct. 2, 2014.

Bates might as well continue as speaker pro temp until January 2015, which is when Naize’s term as speaker would have ended and the newly inaugurated Council votes for a new speaker.