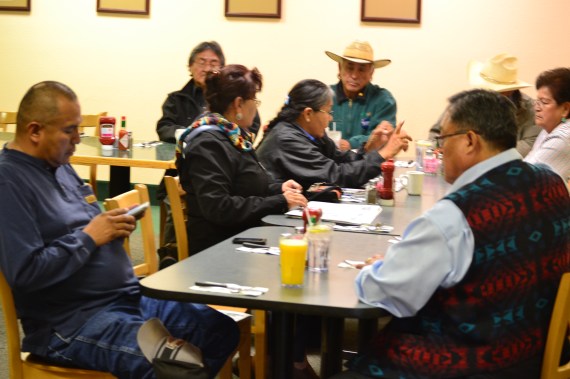 Former Navajo Election Board members meet at the Quality Inn Restaurant in Window Rock, Ariz., on Nov. 13, 2014, with a few community members. At front of photo, L-R, are Norman L. Begay and Tom M. White Jr. Sitting near Begay are Frannie George and Ruth Watson. Watson is talking with a couple of people as disqualified presidential candidate Chris Deschene’s spokesperson Albert Shirley, who is wearing cowboy hat, listens. (Photo by Marley Shebala. When reusing photo, please give proper credit.)

Former Navajo Election Board Vice Chairperson Tom M. White Jr. said this morning, Nov. 13, that the former Board did not meet as they had planned at 9 a.m. at the Quality Inn Business Complex conference room in Window Rock, Ariz.

White said that the decision for the board not to meet was decided after Navajo Election Office Director Edison Wauneka emailed them letters that informed that they were no longer board members and that they were prohibited from holding and running for a Navajo Nation elected position for eight years, which was the result of the Navajo Nation Supreme Court deciding that the board was in CONTEMPT OF COURT.

He added that he asked Wauneka to present his letter to them in person, instead of email, but Wauneka declined.

White said that the ban on former board members running for a tribal election office directly impacted him, Norman L. Begay, Lenora Fulton, and Ruth Watson.

He explained that he and Begay were running for Council delegate positions and Fulton and Watson were running for re-election to the board and Wauneka informed them that they were disqualified candidates.

White said that they have the option to appeal their disqualification. He did not say if he and the other former board members would file an appeal.

As soon as I arrived at the Green Room, White informed me about the emails from Wauneka and said that the former board members were visiting with individual citizens.

The former board members that were in the green room were Tom, Norman L. Begay, Frannie George, and Ruth Watson.