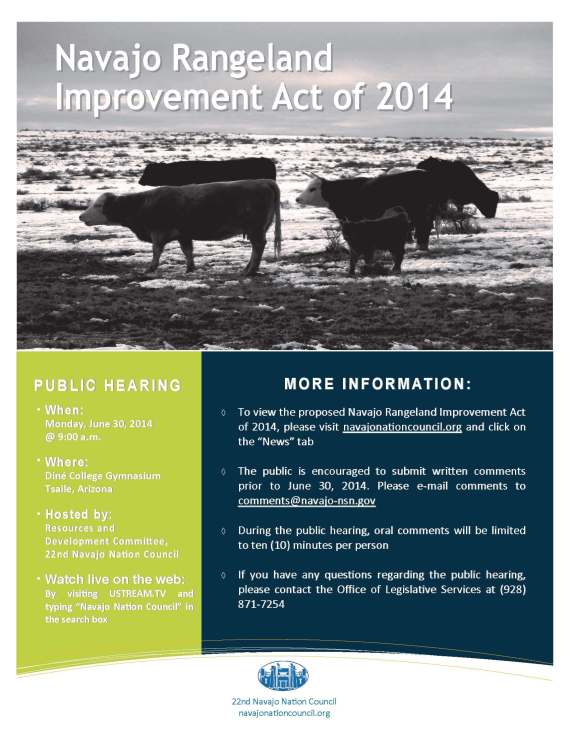 The Navajo Council’s Resources and Development Committee is holding a public hearing on the proposed Navajo Nation Rangeand Improvement Act, formerly known as the Navajo Nation Grazin Act, at Dine’ College gym, AKA Pinon Pit, in Tsaile, Ariz., on June 30, 2014, starting at 9 a.m.

According to the press release, the public hearing will be streamed live on UStream – http://www.ustream.tv/channel/navajo-nation-council – and copies of the proposed Rangeland Improvement Act are accessible by going to the Navajo Council website – http://www.navajonationcouncil.org/index.html – and clicking on the “News” tab. But those individuals that unfamiliar with the Council website and the “News” tab, I located the web address for the initial public announcement by the Resources and Development Committee about the June 30 public hearing at Tsaile and the attached proposed Rangeland Improvement Act. The web address is http://www.navajonationcouncil.org/pressReleases/2014/JUN/DRAFT_Navajo_Rangeland_Improvement_Act_of_2014.pdf OR you can also click on PROPOSED RANGE LAND IMPROVEMENT ACT to immediately access the RDC announcement and proposed Range Land Improvement Act.

For more information, please contact the Office of Legislative Services at (928) 871-7254.