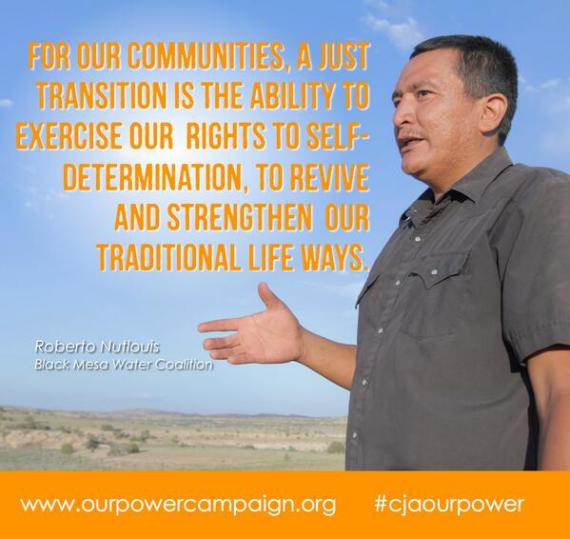 BlackMesa, AZ – For decades, Navajo community members have expressed concerns around the cumulative damaging impacts of coal mining in the eastern and western parts of the Navajo Nation. They elicit concerns on the increasing and direct impacts felt by Navajo communities,ranging from social to ecological effects such as the relocation of Black Mesa families to the severe damaging of pristine aquifers.

“Although many grassroots people have continually reminded our leaders to be cognizant of our future generations so they will be ensured to have the natural healthy resources they will need, such as clean water and clean air, yet our leaders ignore us. They have made a statement that revenues and jobs are more important than Navajo quality of life. Only a few Council Delegates stand up for what is right for our people, I applaud them,” states Anna Frazier a Navajo citizen and Dilkon community member.

On July 18th, the Navajo Nation Council approved the highly controversial legislation 0177-13: the Navajo Generating Station (NGS) lease extension. “I am appalled by our leaders. They completely violated the United Nations Declaration on the Rights of Indigenous Peoples by undermining the meaningful participation of our people. Public participation is absolutely necessary to avoid the continued exploitation of our lands, people and resources, it is meant to give us a foundation for protecting our future. By rushing to approve the legislation so they could gain a signing bonus, they have made a mockery of our communities’ real priorities: to ensure clean air,water and irrigable land for our future generations,” states Janene Yazzie with Sixth World Solutions from Lupton, AZ.

The Navajo Nation Council decision was controversial even amongst the Council Delegates themselves. A number of amendments to this agreement were narrowly approved by just one vote. “I like to express my sincerest gratitude to each of the six Council Delegates that voted against the NGS agreement, they are true warriors and leaders looking out for the best interest of our Nation, ” stated Elsa Johnson, Director IINA Solutions.

Before Navajo Nation President Ben Shelly signed the Navajo Nation Council approved legislation 0177-1, which would legitimize the NGS lease agreement, a group of Navajo community members and organizers met with President Shelly to encourage him to veto it for a better lease agreement. A primary concern of this group was the unreasonable time period allowed for public commenting and the lack of data and information disseminated to the public.

“Time and information is critical to making well-informed comments regarding the future of the Navajo Nation. As tribal members we were prohibited from seeing the actual agreement,” states Wahleah Johns of Black Mesa Water Coalition. “We have every right to be concerned, especially as our children will be inheriting a polluting coal plant for another 25 years.”

The group provided a few letters of concern urging President Shelly to veto legislation 0177-13. They encouraged the President to push for an agreement that more equitably claims Navajo Colorado River water rights, currently being used by NGS Power Plant and Peabody’s Kayenta CoalMine. The group highlighted the many environmental concerns with the current agreement, in particular the questionable cleanup of toxic coal combustion waste and need to reduce greenhouse gas emissions. Additionally, the group drew attention to the NGS agreement’s lack of a Just Transition plan, specifically a plan that would transition from coal jobs to a solar and wind economy that would provide more long-term and sustainable Navajo jobs.

“We cannot wait another decade or quarter of century to claim our water rights from the Colorado River – and continue to live with toxic air, toxic aquifers, toxic soil from coal. Our homeland is our true wealth,” says Donna House from Oaksprings, AZ.
Still on July 30th, Navajo Nation President Ben Shelly signed the NGS lease agreement into law at a signing ceremony in Window Rock, the Navajo Nation capital.

“The saddest thing is that our relatives who work for NGS, SRP and Peabody, our brothers and sisters, and their children, will be alongside us when in 25 years the corporations leave our nation with nothing — no water and no employment. That is the legacy Ben Shelly and his administration so blindly leads our people towards,” states Janene Yazzie.

Navajo citizen Ed Becenti expresses a growing sentiment, “I think President Shelly has made a bad decision for the Navajo Nation. He has let outside corporations seek their profit at the expense of the Navajo people.”

“Absurdity is that Navajo Nation is at 42% poverty level yet we subsidize the wealth of Arizona,” states Elsa Johnson.
“It is another sad day on Navajo land. The Navajo People at large will live the next 29 years of constant CO2 pollution spewing into air while NGS owners will pocket billions of dollars from our limited natural resources. The Navajo people need new leadership now,”says Byron Huskon from Cameron, AZ.