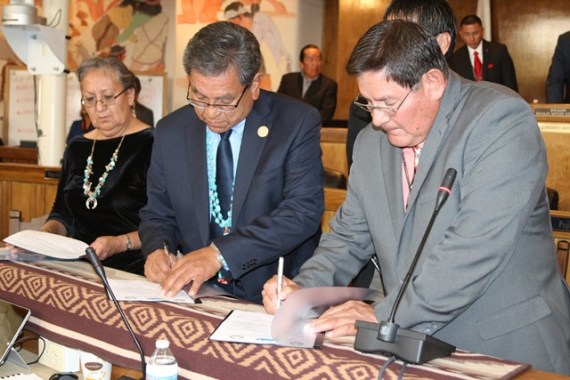 The signing ceremony took place on the floor of the Council Chamber at the opening of the Summer Council Session on Monday. The written agreement outlines nine priorities, with particular emphasis on water rights/projects, economic development, and infrastructure. Other areas included were housing, education, human services, governance, public safety, natural resources and judicial needs.

and Order Committee, Health, Education, and Human Services Committee, Resources and Development Committee, and the Budget and Finance Committee for meeting with the respective programs, divisions, and departments that each oversees.

“This Council met with the President, Vice President, and the Acting Chief Justice to talk things out in order to move things forward. Provided that there are many needs in our communities, we need to start somewhere to help the Navajo People,” said Speaker Bates, adding that the priority listing is inclusive of the public’s input and the four pillars of President Begaye’s administration.

President Begaye called the signing of the agreement a historic event and thanked the three branches of government for coming together and establishing the priorities.

Acting Chief Justice Shirley said she is hopeful the Nation will be able to fulfill the agreement and to work toward each of the priorities while emphasizing the need for the Nation to have an independent judiciary system that provides confidence to the people.

“It is my sincere hope that this agreement will be a guiding document for our leaders as we look forward, not just for the next four years, but for decades further and leave a legacy for our children and grandchildren of self-sufficiency and sovereignty,” Acting Chief Justice Shirley said.

The agreement developed after the Council directed Speaker Bates to hold the leadership meetings with the purpose of aligning the Nation’s priorities and to re-establish relations between the tribal branches of government to advocate and lobby more effectively on behalf of the Navajo people at the county, state and federal levels.

The three branches will continue to meet on a regular basis to continue working toward accomplishing the Nation’s priorities.

For news on the latest legislative branch activities, please visit www.navajonationcouncil.org or find us on Facebook and Twitter, search for keywords: Navajo Nation Council