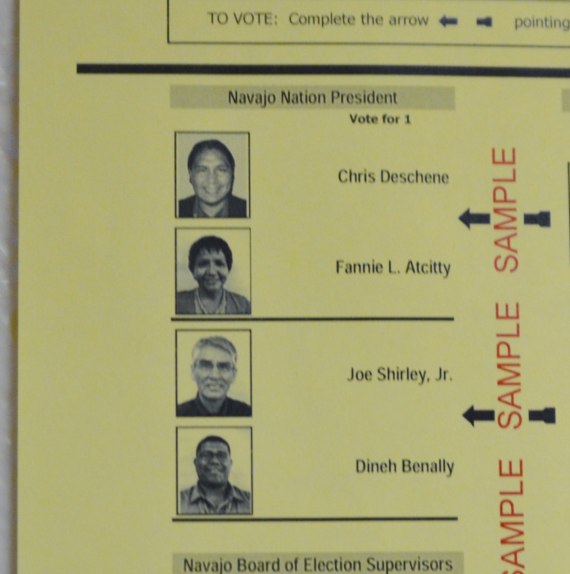 A sample ballot for the Navajo Nation Nov. 4, 2014, general election that Navajo registered voters, including disqualified presidential candidate Chris Deschene, were using to cast their vote on Oct. 13, 2014. The sample ballot was posed on the outside wall of the office of the Navajo Nation Fort Defiance, Ariz., Agency Election Office in Window Rock, Ariz., where absentee voting was occurring. Photo by Marley Shebala (Please give proper credit when reusing photo)

In legislation related to 0341-14, Tsosie got the Council to Table Legislation 0249-14, which was for the appropriation of $286,247 in funding for the Navajo Election Administration to immediately conduct a Special Presidential Election between Former Navajo Nation President Joe Shirle Jr. and Navajo Council Delegate Russell Begaye, during the Council’s special session on Dec. 23, 2015. But before the Council Tabled Legislation 0247-14, Tsosie successfully got the Council to amend 0247-14 by adding language that removed the language “immediate” and replaced it with language that allowed the Navajo Election Administration to hold the Special Presidential Election anytime before Aug. 31, 2015.

But today, Dec. 29, 2014, Tsosie was not so successfully before the Council’s Naabik’iyati Committee, which recommends legislation to the Council. The Council is having another special session tomorrow, Dec. 30, 2014, and released their proposed agenda, which can be amended by the Council when its adopting it or anytime during the special session.

Tsosie was sponsoring Legislation 0391-140391-14, which was a Pardon for the Navajo Election Board. On Oct. 31, 2014, the Navajo Nation Supreme Court found the Navajo Election Board in CONTEMPT of its Oct. 23, 2014, Writ of Mandamus court, a misdemeanor, on Oct. 31, 2014, for failing to enforce the Navajo Nation Office of Hearings and Appeals Final Ruling on Oct. 9, 2014, which disqualified Chris Clark/Deschene as a presidential candidate. The disqualification immediately triggered election law that mandated that the next presidential candidate, who was Navajo Council Delegate Russell Begaye, be moved up into the position vacated by Deschene, which was the number two position in the 2014 General Election presidential race.

Legislation 0391-14 was the last item on the Naabik’iyati Committee’s agenda today and after legislative staff read 0391-14 into the legislative record, Naabi Committee Chairperson Pro Tem LoRenzo Bates announced that Naabi had lost a quorum at about 4:58 p.m. The lack of a quorum prevented a vote on 0391-14.