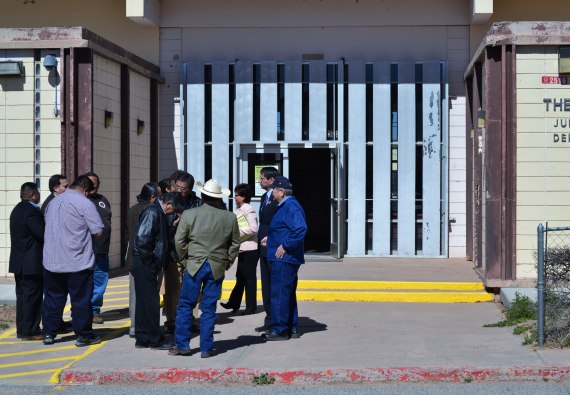 Navajo Council delegates, legislative staff and other individuals talk briefly outside the Navajo Nation Window Rock District Court on after an April 8, 2014, hearing on a Temporary Restraining Order filed by Speaker Naize against 12 delegates and one legislative employee. Photo by Marley Shebala.

Naize filed for the TRO on April 7, after the Council voted 12 in favor, 0 opposed to place him on paid leave on April 4. The Council also named Delegate LoRenzo Bates as Speaker Pro Temp. Judge Perry ordered an April 8 hearing on the TRO petition on April 7.

On April 8, Judge Perry briefly heard oral arguments from Naize’s private attorney, Brian Lewis, who is one of three attorneys with Greenberg Traurig, LLP. of Denver, Colo., which is the law firm representing Naize, and Henry Howe, attorney with Navajo Department of Justice. Perry then ordered a third hearing for April 16, which has been postponed.

Late this evening, Bates said that he was notified about the postponement about 4:30 p.m. and that that was all the information he received.

It is not known at this time why the hearing was postponed but as soon as I receive information, I will post it.

The Navajo Department of Justice is representing the 12 Council delegates and Legislative Services Director Tom Platero. The lead counsel for NDOJ is Attorney General Harrison Tsosie. The other tribal attorneys assigned to the case are Paul Spruhan and Rodgerick Begay.