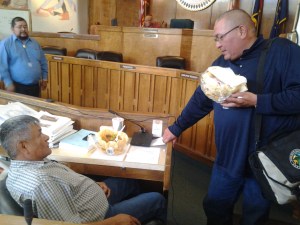 RESOURCES & DEVELOPMENT COMMITTEE VICE CHAIRPERSON SMITH
We are trying to create legislation that can be properly presented to Council.

DEPARTMENT OF AG EXTENSION AGENT RAY CASTILLO
When i was talking about elected officials and 24 not working, i was referring to one grazing official who has served numerous terms that add up to about 25 years and it’s wife that has repeatedly misused her grazing permit to have more livestock than legally allowed on her permit.

NAVAJO DEPARTMENT OF JUSTICE BITAH BECKER
We have 75-page draft and decided present two-page summary.
And regarding probate of grazing permit, there is no probate. If individual is not named on permit then cannot be added through probate.

how do we go from where we are today to vision of future? Phase out permits and phase in new permits. Act wud require six year permit renewal. Before anyone issued permit, ag dept empowered look at carrying capacity and stocking of land and then permit issued.

today permits renew automatically and probated which resulted in factionalized. preference given to holder that is responsibily exercising her rights, like driver’s license. preference is allowed to allow permit holder confidence that will have permit renewed for taking care of range and livestock.

Two big concepts under this section: wat is role of grazing permitee to hold back development of land, such as homesite lease. see page one, subchapter 2: permit does not stop land withdrawal if it is in best interest of tribe.

Grazing fee has to be assessed so public confident that not paying too little or too much.

Subchapter 3: currently permit issues for 10 sheep. Eastern Land Baord recommended minimum sheep units should be 30. Dept of Ag recommending two types of permits: commercial for 50 sheep and individual has 10 cuz there are some permittee that have more than 50 and others with ten or less.

I recall discussion that many permitees living in Phoenix and off rez, so how prevent a person from Phx blocking other Navajo pple from making use of land.

If someone take Act to court, court wonder why Council approvement Rangeland Improvement Act and so should be in Act that rangeland dust bowl and that permitees abusing permit, that some permitees live off rez, that land needs to be freed up for homesite lease.

Find out how where permitees located, how much land controlled by permitees, Reason brain drain on rez is cuz no place to live cuz no housing development cuz land held by permitees.

When young Navajos return home and ask for homesite lease, housing, the permitee and their supporters question them and some even tell them that they don’t belong on rez. I have great concerns about all these signs and fences; this is private property, stay out! And now, pple fighting.

we need big finding and purposes cuz serious change. and i guarantee that Act will be legally challenged.

Maybe we should have staff present two Acts: one that is tough and the other that is not.

As elected officials we are gutless. Prior Council wouldn’t even debate, they kept tabling.

Grazing permitees are also assaulting grazing officials, rangers, police officers. Their permit should be taken away.

RDC CHAIRPERSON ROSCOE SMITH
And so we are still developing Act. Motion to accept report on proposed Grazing Act and vote.
3 in favor, 1 opposed