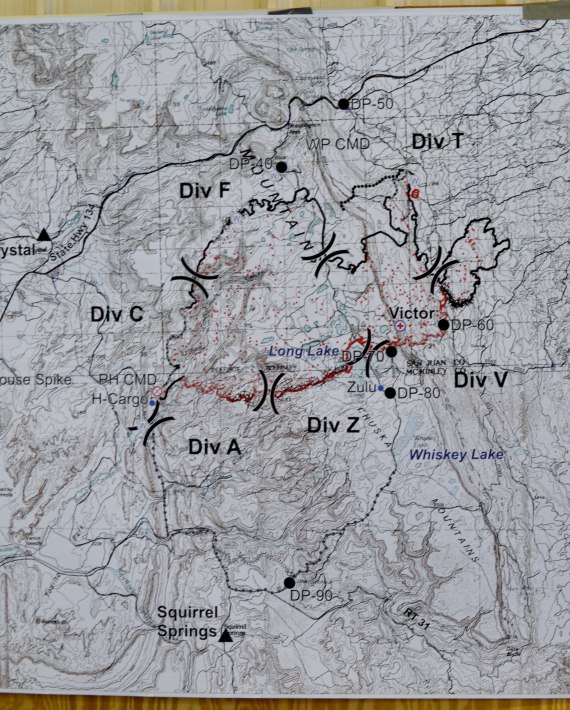 The map of the Assayii Lake Fire that shows 60 percent containment, as reported by the Southwest Incident Management Team 3 during the daily fire update at 9 a.m. at the Tse Hootso Middle School “Tin Building” in Fort Defiance, Ariz. Photo by Marley Shebala. (Please credit if reusing photo.)

Greetings Relatives/Frens/Humans,
The road between Crystal, N.M., and Sheep Springs, N.M, was opened at 8 a.m today, June 22, 2014. The Assayii Lake Fire is also at 60 percent containment and at 14712 acres.

I was at this morning’s daily fire update when that announcement was made by the SOUTHWEST INCIDENT MANAGEMENT TEAM 3. The highway between Crystal and Sheep Springs is called Highway 134. But there are FIVE UNPAVED ROADS that remain closed because they are too close to the fire.

I’ll post today’s fire update on YouTube later today. I also went up to the Fire Line yesterday, June 21, 2014, and got a great interview on video camera with our Navajo Scouts, who are the Navajo Reservation’s Type 2 wild land firefighters. I also will be working on video and photos from June 20, 2014, from the Fire Line.

May Peace Prevail on Mother Earth! 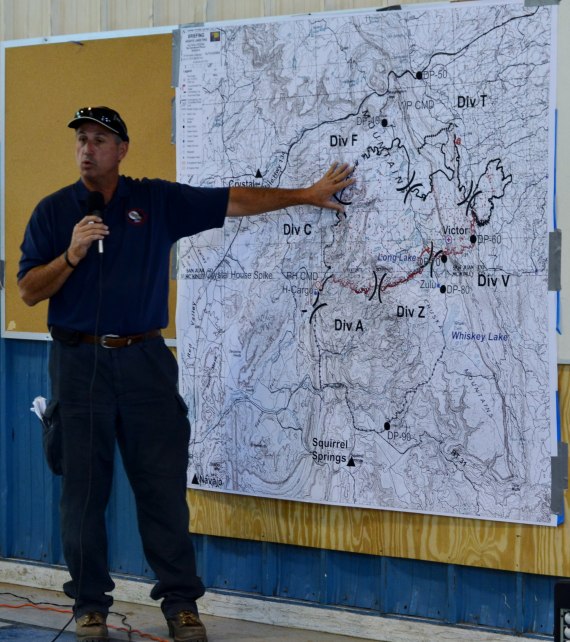 Southwest Incident Management Team 3 Liaison Officer Ben Fish points out on the Assayii Lake Fire map where most of the fire containment exists, which is designated by black line instead of red lines around the fire’s perimeter, during daily morning fire update at Tse Hootso Middle School “Tin Building” in Fort Defiance, Ariz. Photo by Marley Shebala. (Please credit when reusing photo.)