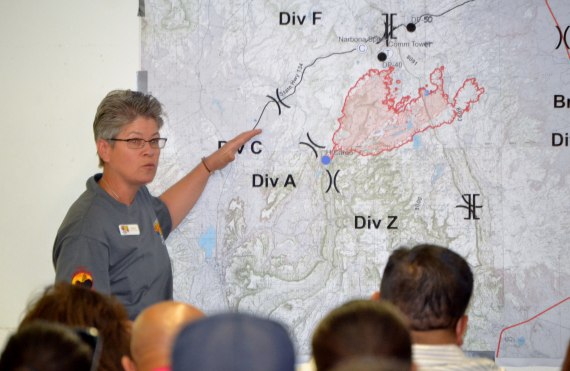 Southwest Incident Management Team 3 Commander Bea Day emphasizes to all attendees at Assayii Lake Fire briefing at 9 a.m. that the fire was still very dangerous because high winds made it unpredictable. The daily fire briefings at 9 a.m. were moved from the Navajo Museum in Window Rock, Ariz., to the Field House in Fort Defiance, Ariz., which is also the SW Incident Command Center. Photo by Marley Shebala.

But high winds started late Saturday and blew the fire out of control. On Sunday, tribal officials met with BIA officials and a decision was made to call in outside firefighting resources.

Folks that fight big fire out there so one of things agreed with Bureau of Indian Affiars, which handles wildland fires, that asked for outside re-enforcements.

Sunday and yesterday did air drops with water. But gets too dangerous even with fire retardant.

Every morning and evening 7 p.m. and Crystal 6 a.m. put plans together so start emailing to legislative. emailed to Platero. 593 firefighters fire. not actually in front of fire cuz too dangerous cuz of wind. so on north, south and east sides, they’re building fire lines to try and control fire. it’s going east. It says zero containment. If wind like this today, tomorrow and Thursday, fire will stop at fire line.

firefighters out there doing assessments and if come across corralled livetock then open corrals. closed roads cuz people traveling in and out.

i went to Naschitti and Sheep Springs. As leaders we need to show calmness.

We don’t see anyone but there’s 593 firefighters. And they’re making sure no one is in area that is not suppose to be there.

Also regarding donations and equipment, they appreciate but they have. Crystal, Naschitti and Sheep Springs. 500 people and they were fed at Sheep Springs. Reports says 50 families evacuated. At yesterday’s meeting, it was announced that the evacuation centers would be Tohatchi school, Newcomb schools, Naschitti chapter and Shiprock Chapter.

It is sad looking at flames at night. It’s our main recreational area.

On disseminating information, they want info to flow thru them so not create panic. There was news report that Naschitti was being evacuated and it created panic. Navajo Times, KTNN and people of Facebook were asked this morning to get all information from Fire Information Officer.

Got help from McKinley County, law enforcement from Gallup, N.M., Apache Ariz. County so say thanks. Trial Community Health Representatives out there, along with NDOT, Fish and Wildlife. There is wildlife in mountains and they may move down to neighborhoods. Agriculture Department took some livestock out when it was safe. On Sunday when knew fire going over mountain, we asked people to get prepared.

And preparation is first action. Right now fighting fire, mitiagation. once stop fire then go in and asssess damage. Biggest one is recovery cuz lost hundreds of years of growth. We also want to make sure Federal Emergency Management Agency helps.

what told yesterday is that it’s in our as natives to have livestock as priority and livestock was the main concern at the meetings at Sheep Springs and Naschitti.

Also NTUA shut off power lines cuz once heat gets to it, it can electracute fir